Independence Excavating's demolition division kicked off the renovation and reconstruction of the historic Citrus Bowl by bringing down scoreboard amidst fireworks and AC/DC's "Thunderstruck" resounding over the stadium speakers! We teamed with Turner Construction to give the City of Orlando, Florida a brand new, state-of-the-art stadium facility in 11 months before the 2014 college football season begins. We mobilized our largest iron from all over the country to demolish this historic structure, first constructed in 1936, while protecting the precast upper bowl seating structure that is intertwined in the lower frame work.

Working closely with John Ryfa of Turner Construction as well as Turner's Orlando office, Independence crews worked double shifts to surgically demolish the stadium in four weeks. Our project milestones were simple; to be on the 50 yard line in two weeks and completely wrecked in four.

While our forces mobilized for this challenge, we also teamed with great local partners in Central Hauling and Excavating of Florida and Abatement Central, in order to help meet the challenging project schedule. This project was an exciting one for the City of Orlando and residents of Central Florida as well as our team and we are proud to have been part of history in the making! 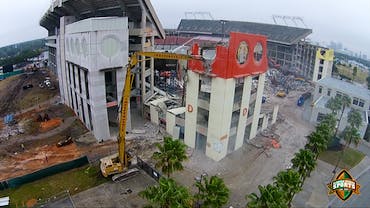