Independence Excavating was contracted by Clark Construction Company to perform the demolition of the existing building and excavation for the foundations of the new office building to be constructed at 400 6th Street in Washington, DC. The first phase of the project consisted of installing erosion control measures and demolishing a seven story concrete frame building. The bottom 2 stories of the building were below street level parking decks. When demolition was complete, the concrete from the building was processed and benched creating a place within the building footprint for the drilling contractor to sit at existing street level to drill for their beam and lagging retaining wall.

After the beams were placed, Independence excavated 30,000 CY and installed the lagging to provide for a safe excavation to a depth 20’ lower than the current buildings foundation. Portions of the excavation contained petroleum contaminated soil. Geo-technical inspectors were onsite full time during excavation to measure levels of contamination and to direct if soils needed to be transported to a normal waste facility or a specialized. Our scope of work also included connecting the water, sewer, and storm utilities to the existing city lines. 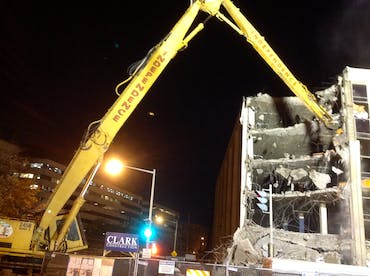 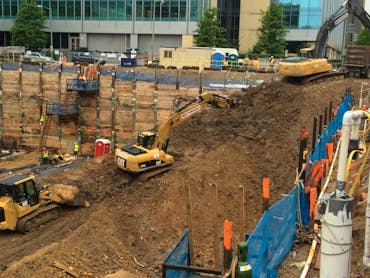