Independence Excavating (IX) was an integral team member with Turner Construction, Cuyahoga County and MMPI in the construction of the Global Center for Health and Innovation in downtown Cleveland. Independence Demolition crews commenced work in January 2011 with the demolition of the existing convention center and surrounding buildings, and was involved in three complex phases through completion to opening.

Contract 1: Demolition of the existing convention center in Malls B and C and demolition of five buildings in the block of Ontario St. and St. Clair Ave. The main structure was cast in place concrete encompassing 14 acres underground in the center of Cleveland between City Hall, the Public Auditorium, Key Tower and Marriott Center. The structure was below Malls B and C as well as Lakeside Avenue. As a value-engineering innovation, bracing of the existing Lakeside roadway was done using massive girders salvaged from the structure demolition and ensured no interruption to the Lakeside Ave. traffic during the project.

Contract 2: Earthwork and utilities installation for the new Medical Mart facility, and dewatering the existing water table on the site for construction. With the extensive planning of our field managers, dispatch team, and heavy and support shops, Independence Demolition began dismantling the structure, piece by piece, and attacking the aggressive schedule to clear the site for the new facility. Crews demolished the enormous structure and excavated to 45 feet below street level adjacent to St. Clair Avenue in preparation for the foundation and concrete contractors.

Contract 3: Final site work, hardscape, and landscaping on the downtown malls overtop the convention center. As steel erection, concrete decking, and waterproofing unfolded, we followed directly behind. Extruded polystyrene block, more commonly known as geofoam was used as the main fill material over the structure to ensure the lighter loading capacity of the structural deck. A total of 48,000 CY of this material was shipped in blocks, and required intensive design and labor to ensure the proper fit and placement of each block. Drainage layers of specialized, organic and blended soils were used for the lawn and landscaped areas. The contract for restoration of the malls also included the flatwork for public gathering areas, walkways and streetscapes for the new public space.

Independence Demolition was a key player in driving Turner's schedule to complete the project four months early. The project is a collection of many proud accomplishments, from the work planning and progression, to the revitalization effort of downtown, to the overall cooperation and working together with Cuyahoga County, Med Mart Properties, and Turner Construction. One of the pinnacle accomplishments of the project: 250,000+ manhours worked safely. 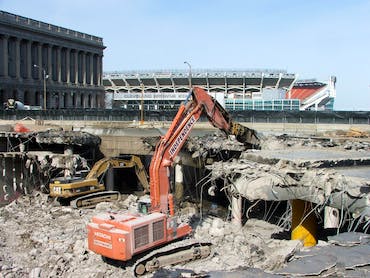 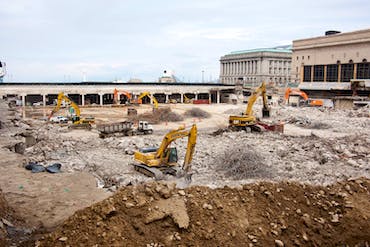 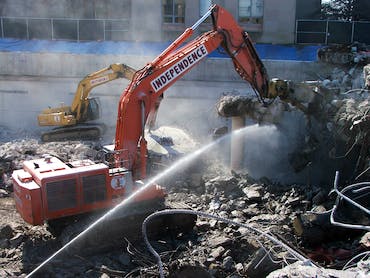 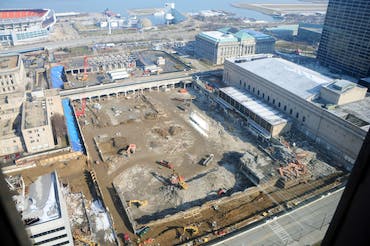