Independence Demolition was awarded the contract to perform building demolition and mass excavation for the Cleveland Museum of Art - Phase 2 expansion from Precision Environmental Co.

Independence Demolition performed the structural demolition of several three to four story buildings with a combined area of 180,000 SF that were attached to existing museum buildings to remain. Precision Environmental performed the asbestos abatement and selective demolition to separate the buildings from those to remain. This was necessary to minimize vibration and avoid damage to the existing museum buildings and priceless art exhibits. Once the buildings were completely removed, Independence Excavating performed the deep mass excavation required for the new museum building. Some of the excavation reached depths in excess of 40 feet in sand and shale. The excavation required an extensive earth retention system of soil nails with grout for the deep subbasement excavation and a beam and lagging wall on the upper portion of the subbasement to retain sand overburden. 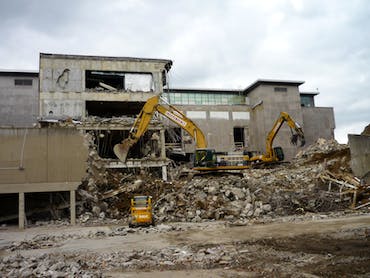