Independence Demolition was contracted by Colorado State University to perform the demolition of the iconic Sonny Lubick Field at Hughes Stadium in Ft. Collins, Colorado.  Built in 1968, covering 161 acres, and at an elevation of 5,200 feet, the stadium seated 35,000 in a natural bowl and included luxury suites.

“Front-end planning was extremely necessary on this job, as we were bringing some of our equipment and staff from our headquarters in Cleveland,” says Don DiGeronimo, Vice President of Demolition. “With forward planning and coordination with our Dispatch Manager, Mike DiGeronimo, we were able complete this task seamlessly.”

This project was performed in 5 months utilizing 80% local labor, working 15,000 man-hours with a perfect safety record.

This project required us to divert 70% of the stadium materials from landfills.

Independence Demolition utilized a high reach excavator to expedite the process of removing the high concrete bleacher sections and the press box. This method was used to aid in completing the project ahead of schedule and ultimately, allowing the concrete that was demolished in place to be processed in a smaller size for use in the crushing activity. We also used dust bosses to maintain dust migration to the surrounding neighborhoods, which was of great concern to Colorado State University. 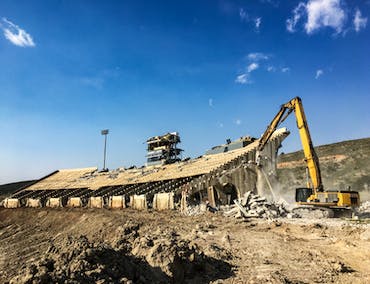 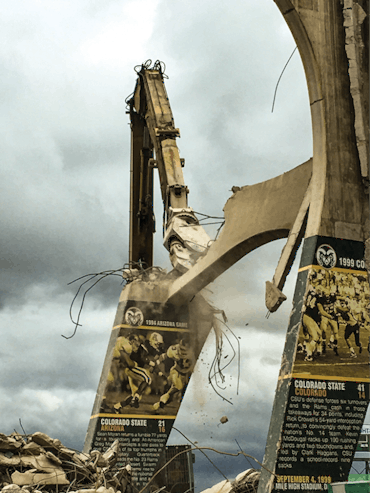 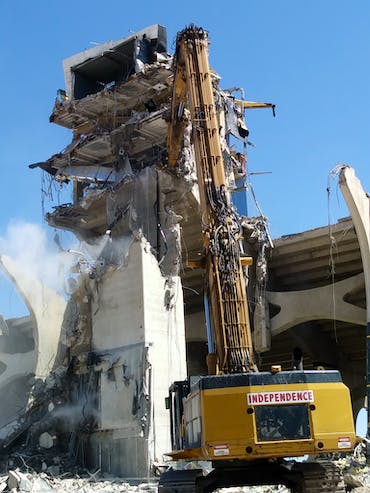