The Conners Creek Power Plant was constructed in 1915 and was later added onto in 1951. It was a vital coal fired power plant for downtown Detroit, Michigan for many years. The originally constructed plant was taken offline in 1988 and later demolished in 1996. The 1951 addition was converted to gas and continued to operate intermittently as necessary until 2008, when DTE officially decommissioned it.

In 2019, the property became vital to the expansion of the neighboring Chrysler plant. Demolition of this plant and clearing of this property was a key component in Chrysler’s expansion to bring 5,000 jobs to Detroit, and construct the first new vehicle manufacturing unit in the City of Detroit in 30 years.

Independence Excavating, Inc. was contracted in the spring of 2019 for the accelerated schedule to demolish the power plant and clear the property. The project included 17 individual structures and a 180 ft. tall power block building with (2) stacks on top, reaching 350 ft. The project also included abandoning a series of underwater canals as well as a cofferdam, dewatering an inlet bay and rebuilding and armoring a new slope. This entire project was on an accelerated schedule ahead of the reconstruction plans.

Challenges on the project included various environmental components, management of a high water table and nearby Detroit River, and a large component of unknown asbestos. These components added to an already tight schedule and pending plans for new local jobs and opportunities. These challenges were met and the project was a success.

Starting in May 2019, Independence Demolition crews mobilized and began demolition of coal handling structures as well as starting right into the asbestos and environmental remediation. Crews spent a good part of the year clearing and demolishing much of the property and preparing the power block. The asbestos quantity grew throughout the project with more uncovered and requiring abatement throughout the project. Independence brought in the resources to rise to this challenge.

As a culmination of all the preparation, Independence, with our partner, Dykon Explosive Demolition out of Tulsa Oklahoma, explosively fell the power block on December 13, 2019. In the end, the detailed planning and team effort of Independence, DTE, AECOM (consultant) and the City of Detroit, as well as many other entities made the event a perfect success. However, the hard work was not over.

Following the felling, crews worked long hours and 7 days per week to clear the debris, the foundations and the site in 8 weeks. The amount of material shipped out of the site for recycling in that time has dwarfed any other project efforts in the demolition division. All of the efforts paid off in the success of the project. The project was complete one week ahead of schedule in late February 2020 and turned over for reconstruction and rejuvenation of the area.

The DTE Conners Creek project is an example of monumental efforts, planning and partnering among, owner, subcontractors, consultants, and regulators to bring a project on a near-impossible schedule to successful completion. To add to that success, of the 120,000 hours worked on the project, there were no recordable or lost time injuries and only one first-aid case on the entire project. 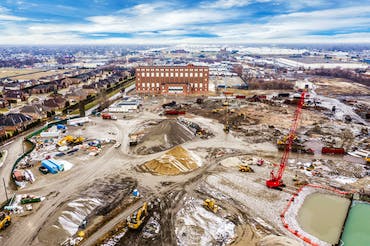