Lowellville bridge pier demolition project was an operation to remove 12 abandoned concrete bridge piers from the Mahoning River. The piers were creating a hazard by collecting debris that was floating down stream and creating a serious damming effect that not only created a potential for flooding but was also changing the flow of the water and creating erosion issues.

This project began by hauling recycled concrete from an offsite location in to build a causeway. The material was delivered utilizing the access road adjacent to the CSX rail road tracks. The material was then placed in the river starting at the south abutment.

The causeway installation was carried out in phases. The first phase included a combination of dozers, loaders, excavators and haul trucks placing the recycled concrete to an elevation just above the 100 year high water mark to ensure the safety of the workforce and equipment. This was the platform from which the demolition was carried out. During this phase the causeway was covering approximately half of the river bed allowing access to the first six piers.

As the causeway was installed and the machinery continued to reach farther across the river, the trees and garbage that had been accumulating on the upstream side of the piers was removed. The garbage was hauled off site and disposed of at a licensed disposal facility and the trees were placed in the tree disposal site on the First Energy property.

The piers were then taken down to just above the water level by mechanical means using a hydraulic powered hammer mounted on an excavator. Once all six of the piers in this section were down to this level the machines were moved out of the immediate work area. Once the area was vacated a blasting company began the process of drilling the piers and placing charges to demolish the balance of the pier.

The piers were removed to a depth equal to 3’ below the mudline of the river based on the direction of the Army Corps of Engineers. Upon completion of the blasting of the first six piers the explosives contractor then removed their equipment from the work area to allow us to regain access to the work area.

When the causeway was completed on the far north end of the riverbed we began the process of taking down the remaining piers. The same operation as before will be repeated including both the mechanical and explosive demolition.

Some of the recycled material was placed along the river bank to restore damaged areas caused by erosion over the years. Other processed material will then be placed on the roadways to address any wear that was caused by this process. 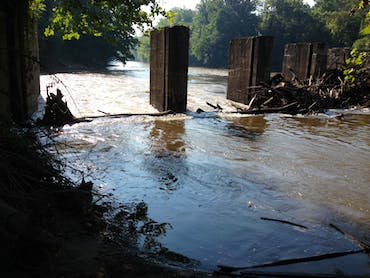