The 100-year-old impressive red brick structure east of Cleveland, Ohio is a recognizable figure on the shores of Lake Erie. The plant sat sandwiched between the lakeshore and the I-90 expressway occupying 57 acres of prime real estate that is targeted to be incorporated into the city’s downtown revitalization.

The BetTech, Independence Excavating, and Precision Environmental Team were contracted to decommission, demolish and restore the area for future redevelopment. Precision Environmental’s scope of work commenced in September of 2015 and wrapped up in anticipation of the demolition crew’s mobilization to the site.

The demolition crew tackled the deconstruction and demolition of the following elements:

The stripping of 2 ft. of topsoil followed to correct the site drainage towards the existing on-site ponds and the site is available for reuse and redevelopment. 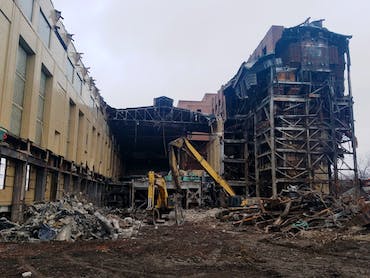