Independence Demolition continued our successful working relationship with Ford Motor Company and Devon Industrial Group (DIG) with the decommissioning and demolition of the former Ford Twin Cities Assembly Plant (TCAP) located on the banks of the Mississippi River in St. Paul, Minnesota. The former home of iconic vehicles, the Model T and the Ford Ranger, started automobile manufacturing in 1925 and was officially shuttered in 2011. The nearly 67 acre campus held a 320,000 square foot paint shop and a separate 2-million square foot main assembly building. The paint shop housed a network of paint booths and ovens and a nearly 225 foot stainless steel super stack that was part of the former pollution abatement system. An enclosed overhead trestle allowed for vehicle bodies to be conveyed from the paint shop into the main assembly building for final assembly.

The plant decommissioning work was started by Independence Demolition in the fall of 2012 and included a complex array of environmental issues that were tackled in cooperation with our subcontractors, Mavo Systems, the MPS Group and J&J Contracting. Environmental activities included the abatement of asbestos containing building materials, including the abatement of over 30,000 linear feet of asbestos insulation from the facility steam lines, the removal and disposal of all facility universal waste, hazardous waste and USTs. Independence Demolition was also required to perform a thorough cleaning of the paint booths, ovens and facility superstructures prior to demolition activities. Demolition of the paint booth got underway in June and demolition of the main assembly building started in July. The job was completed in early 2014 and will home to future developments for the City of St. Paul and Ford Motor Co. 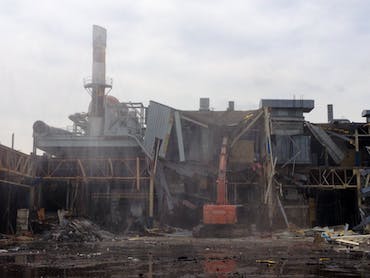 Over 30,000 linear feet of asbestos was removed.