Independence Demolition performed the stabilization of on-site soils and remediation of approximately 12,500 tons of soil at the former Broadway Commons property in downtown Cincinnati, Ohio. We were contracted to remove soils and rubble containing heavy concentrations of lead and arsenic along with an elevated soil pH. This project was required prior to the actual site excavation package due to the environmental concerns presented.

We were able to offer the owner nearly $1 million dollars in savings by treating the soils on site and thereby allowing it to be disposed of as a non-hazardous material. All workers on site were required to have completed a 40 hour HazMat and Lead Awareness training program.

In this project, soil stabilization and remediation was accomplished by introducing chemicals, also known as stabilizing reagents, into the soil via an excavator and truck mounted lime spreader. By utilizing the Wirtgen 2500S Recycler, through our affiliated company Flex-Tech Resources, and Independence Excavating’s bulk storage silo, spreader and excavator, we were able to store, spread, treat and load everything on site while under strict supervision of the project’s environmental consultant.

Independence elected to team with Premier Magnesia, LLC, the sole manufacturer of EnviroBlend heavy metal treatment products. Their products have the ability to be blended and manufactured to address waste specific chemistry needs. The EnviroBlend product effectively stabilized the lead, making it non-hazardous, without adversely affecting the arsenic, and at the same time controlling the soil pH. Controlling the pH is essential in metal treatment, specifically with lead, as lead leaches at both high and low pH values. 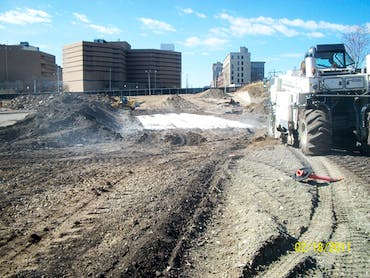