In late 2018, Independence Excavating, Inc. (IX) was the successful bidder for the demolition of the abandoned Herschel Greer Stadium in Nashville, Tennessee. The project was publically bid and awarded by Metro Nashville, based on previous experience, work plan, technical approach, and overall value.

On the surface, the demolition of this former minor league baseball stadium appeared straightforward with minimal challenges. In reality, however, the daily operational limitations and archeological oversight required due to the stadium being constructed over a civil war encampment, for the builders of Fort Negley, planning and execution were critical. Large areas around and under the stadium could not be disturbed during demolition. In fact, archaeological surveys revealed that certain areas below and around the stadium contained human remains. This required the structure to be surgically disassembled and for pieces to be moved to areas safe for work to be processed and loaded out.

In addition to the archaeological challenges, seats and the famous guitar scoreboard were salvaged. IX coordinated with a local developer who purchased the scoreboard as an exhibition piece for their new development. Without scoreboard drawings, the investigation by IX was critical to ensure all picks were safely planned and that the scoreboard could be properly disassembled in order to be reassembled in a working manner by the developer. IX completed this project with zero incidents and injuries, without a single change order, below budget and ahead of schedule — all of which are unusual to the Nashville market.

“It was a pleasure working with the Independence (IX) team, especially closely with Matt Welsh and Steve Marinin, on the Greer Stadium - Deconstruction and Demolition project. The IX team did a great job! They were all very knowledgeable and always very professional. They were
easy to communicate with and easy to work with! They were very aware of project-specific constraints (specifically archaeologically sensitive areas on the property) and worked in a manner to protect those areas. Thank you for all your hard work. I would fully recommend IX in the future.”

IX collaborated with great partners on this project working as a team to bring the project to successful completion. These partners included Collier Engineering, whose planning and coordination helped ensure the work flowed smoothly; the local unions for their assistance and push to bring quality, safe and experienced union contractors to Nashville; and the staff of Metro Parks who were always available for short notice meetings and quick turnaround times for decision making — allowing us to stay on schedule.

Many in the area were sad to the see the iconic field demolished. Our onsite personnel had the opportunity to speak with and hear stories from many locals who remembered attending games or had family who played at the park and wanted one last look before it was gone. At the same time however, many felt it was time for the stadium to go, as it was attracting unwanted trouble in the area.

At this time, the future of the site is undetermined, but with the location adjacent to Fort Negley, it leaves Nashville with many possibilities. 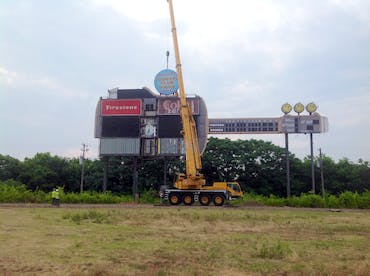