Independence Demolition (ID) provided field support services to facilitate the remediation of thorium contaminated surface and subsurface soils that exceeded United States Nuclear Regulatory Commission (USNRC) release criteria. The project goal was to obtain unrestricted release of the impacted property. The contaminated property was divided into 100 cubic meter grids and each grid was evaluated for levels of contamination. Soil were then surgically excavated to a depth of one meter, loaded into waiting tractor trailers for disposal off site at a licensed and approved landfill. Clearance samples were then collected from the 1 to 2 meter level to verify that the unrestricted use parameters were met. If the average thorium concentration of an exposed grid in the 1 – 2 meter layer caused the average concentration to exceed the acceptable threshold level then additional material was removed. Once a grid was cleared the excavations were backfilled with clean granular fill material. ID was required to following rigorous decontamination processes daily to ensure worker protection and containment of impacted material. 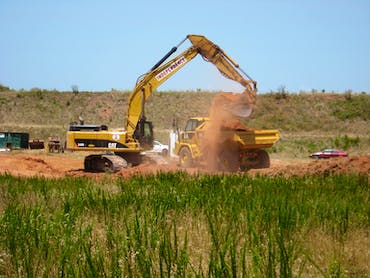