The Metro Health main campus began their multimillion dollar campus expansion with the demolition of the former North Coast Behavioral Health (NCBH) Building. Independence Excavating, Inc. (IX) was awarded the complete mass demolition of the entire existing structure. The original NCBH Building was built around 1922, as part of a modern hospital complex for the City of Cleveland. The building was constructed of steel framing with concrete casing, and finished with a brick exterior façade. There were several alterations and expansions throughout its nearly 100 years of use and history, which—as often occurs—resulted in less detailed records, a situation that created many challenges for our project team. The main bed tower stood 10 stories high, with later additions of two annex buildings to the east and west. A two-story, tiered lecture room was also expanded upon—on the 11th and 12th floors of the bed tower—at some point in this building’s history. It was the latter—the expanded lecture room—that made the job interesting. IX first installed ten 15’x30’ steel debris catchers to protect people and property, 160’ below the initial work. We selectively demolished the lecture room and three bed tower floors with mini excavators and skid steers, totaling approximately 50,000 sf of building. Once demolition had been completed to the 7th floor, IX mobilized our 245 High Reach Excavator and let our crews go to work! When demolition of the entire structure was completed, we crushed nearly 35,000 tons of building materials into a blended hard fill, which we used for backfill and general site restoration. Nearly 225,000 SF of building was demolished in its entirety. 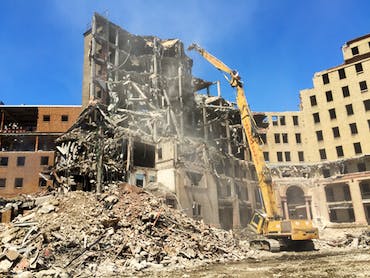 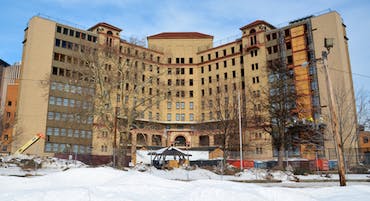 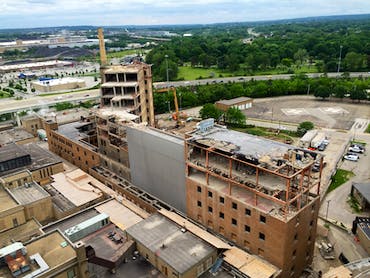