Wrecking the hotel with a conventional crane and wrecking ball would potentially endanger a three-story glass-enclosed 20-foot-long pedestrian bridge located just 30 feet away from the building. The hotel structure was comprised of seven-inch-thick post-tensioned concrete slabs spanning 75 to 100 feet over eight-inch-thick lightly reinforced shear walls spaced at 26 feet to a central 26-foot-wide elevator and stairwell. After stripping away the brick, aluminum and glass facade, the structure would progressively collapse floor by floor like a house of cards and threaten the Cleveland Clinic employees and patients who use the pedestrian bridge below.

To safeguard the pedestrian bridge, Independence Demolition worked closely with the subcontractors on site: Precision Environmental, Safway Steel, Waco Scaffolding and Equipment, and Leinweber and Associates.

Structural analysis by Don Leinweber revealed that the structure could be systematically demolished by re-shoring four floors at a time and using Bobcat mounted hammers to reduce the floors and walls to rubble that would be transported to the ground through the elevator shafts. Each subcontractor then focused on one step of the demolition and coordinated their efforts with the entire group. Waco did the re-shoring, Safway handled scaffold erection at the entire north face, and Precision Environmental was responsible for complete architectural demolition of the building interior and curtain wall. Morse Diesel International Vice-President Ralph Repp and structural consultant Greg Chacos who both helped construct and design the Omni Hotel & provided valuable oversight to ensure a safe and smooth demolition. 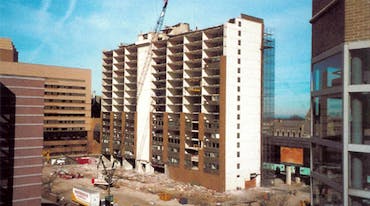