Independence Demolition was contracted to complete a large scale concrete removal project at the the Ravenna Army Ammunition Plant in Ravenna, Ohio. Our scope of work included complete foundation and footing removal, as well as processing and hauling 16,500 yards of concrete off-site.

During World War II, Ravenna, Ohio was the site of the Ravenna Arsenal, which produced more weapons for the war effort than any other plant in the United States. More than 14,000 Ohioans found employment here during World War II, illustrating Ohio’s important contribution to winning World War II from 1942 to 1945.

Their goal was to remove the building foundations in order to test and abate the underlying and surrounding ground from any explosive residues left behind from years of building bombs on the site. 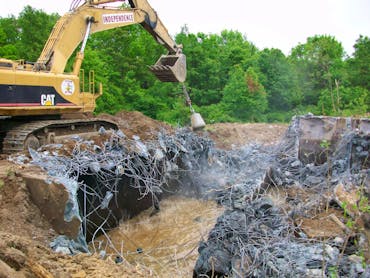